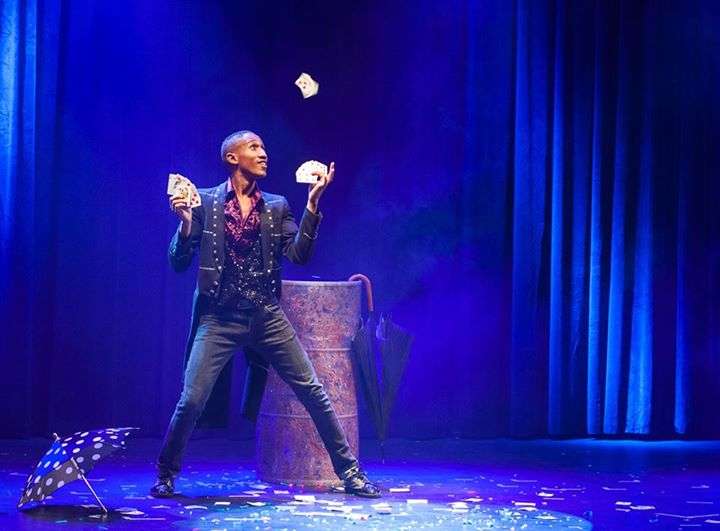 Olwethu Dyantyi Magician Extraodinaire, was born in Khayelitsha, Cape Town – on the 23 December 1992.

He operates professionally from Cape Town around the World. Olwethu is an extremely talented and hard working magician. With his major claim to fame being his Card Artistry, he is skilled in card manipulation. (guess he would be a modern Cardini- with his own originality and personality).

I have seen many of his performances and the absolute joy, movement and level of skill he displays is something to behold.

What made Olwethu become a magician? (in his own words):

“When I was in primary school, we used to have magicians visiting our school for magic shows. I was so fascinated about magic and how it was being done. Not long after that, the College of Magic visited our community, for a big magic show called the “Khayelitsha Magic Festival”, this was in 2004. I remember the tickets cost R5 and I attended the show. I could not close my mouth after watching that show.

I saw young magicians performing magic, I saw illusions… it was a magical day for me, seeing how beautiful magic performed live was. I was blown away and thought that the magic was real. I went home and told my parents about the show and that I wanted to become a magician. Luckily, there was a student from the College of Magic staying around my place and I could get the information I needed for joining.”

How long has Olwethu been performing magic?

He has been doing magic for 10 years and performing as a professional for 3 years (2015). Olwethu completed his 6 year course at the College of Magic in Cape Town in 2009.

He has performed in most of the popular places in Cape Town and around South Africa. He has also performed in Las Vegas, Italy, the United Kingdom and China.

A few weeks ago, he won the Stage Magic contest of the 2015 SA Magic Championships. He was also the overall “Grand Prix” winner, with a standing ovation at the completion of his act.

What is Olwethu’s funniest moment in magic?

My funniest moment is when I was performing at the V&A Waterfront in Cape Town, doing a floating broomstick illusion with my assistant. It was a 45 minute illusion show, with friends from the College of Magic and I performing. I was on stage with my assistant getting ready to float her on the broom, only to find out that the base of the illusion was not there (it had been forgotten in the dressing room). I had to act in front of thousands of people watching and go tell my friends backstage that we need to get the illusion on stage without the audience noticing that something was going wrong. It was very funny and scary at the same time. We did manage to get it sorted out in time and continued with the show.

My scariest performance was on the South Africa’s Got Talent finals. Scariest… because the finals were Live on Television.

What would Olwethu like to make even “better” in Magic?

I would like to share my experiences with other young magicians (Olwethu is a volunteer teacher at the College of Magic), who also want to take their magic to the next level.

What would Olwethu like to see on this site?

“Good stories and other peoples thoughts.” (Kenny’s note: well there you have it, submit your stories… I will look into getting some kind of forum going, so that people can share their thoughts).

Here is a link to youtube video, Olwethu’s performance in Italy (2013)

Remember Everyone wants to be Entertained… and Olwethu is very entertaining to watch!

Join HIRE A MAGICIAN
Tip and help this website!