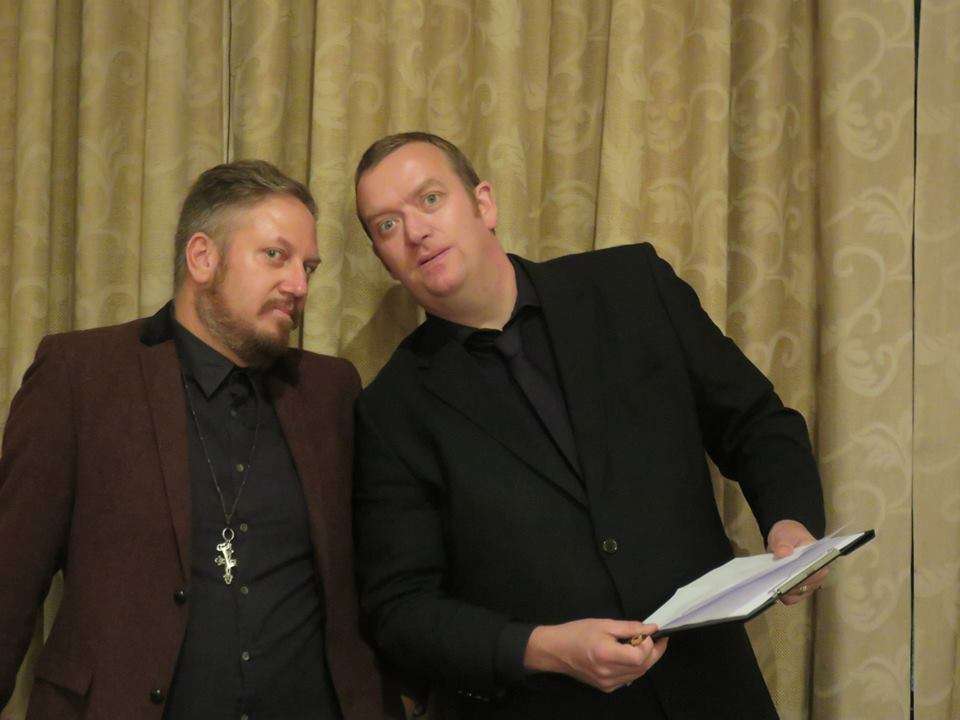 Jacques is probably the most travelled magician within the African continent. He has some stories which could make your hair stand up on end. Unfortunately, they cannot be repeated here on the web. But some scary stuff… you definitely need to have courage and your wits about you if you perform in some of the extreme places on earth.

(Photo above is Jacques le Sueur on the right, with Russel Fox)

Jacques has been kind enough to answer some questions put to him, so enjoy as you hear more about Jacques le Sueur.

What made Jacques become a magician?

I think I enjoyed the puzzle of the tricks I was learning initially, but also the wonder in people’s faces when I showed them the tricks. When I was around 10 years old my parents took me to the Design For Living Expo and I saw a 10cm lady in a fishbowl at the College of Magic stand. I was hooked. :-)

Where is Jacques based, where does he live?

I live in Cape Town, but travel a lot. Lately I’ve done a lot of trips up into Africa, this year I’ve been to the Congo, Tanzania and Gabon.(2015)

How long have you been performing?

I got my first magic set when I was six. I’ve been doing magic fulltime for just over twenty years.

(Editors note: I remember Jacques performing as a busker/ street magician at a College of Magic show “The World of Magic” at the Baxter Theatre in 199?…(can’t remember) think early 1990’s. (poster of that show to the left).

What was interesting is that Jacques  late father was teaching me Calypso guitar at the time and when Jacques finished at the College of Magic, he went over to the UK and did busking there… and his dad would always keep me updated with how Jacques was doing. )

What type of magic do you most enjoy performing?

Jacques, where are some of the places that you have performed?

What is your best magical story (i.e. funniest moment, scariest thing, etc.- something you would like to share)? What are your top tips for performing?

Top tip for performing is to shift the spotlight off yourself, and focus it on the spectator. Make them feel special, that they are experiencing something amazing. Good magic is powerful, treat it with the respect it deserves.

(Editors note: Jacques has a funny story from his time in the UK, when starting out street performing… I have it written down and will add to this page soon).

What would you like to make even “better” in magic?

Ego is a ridiculous aspect of magicians which I don’t enjoy. There are thousands of armchair performers who aren’t qualified to talk about the subject, but start arguments on forums daily to get some spotlight. It needs to be changed.

What would you like to see on this site?

Interviews with pro performers. Insights into what makes them tick, above and beyond the tricks.

What do you consider the best books/ videos/ etc. to learn magic from?

Have you won any special awards that you would like to put on the page (i have already  put  that you are the only magician to have stolen  Mandela’s watch TWICE!… don’t think that can be beaten)?

I do a lot of shows for kids in hospitals and in poor neighbourhoods. For me, their faces when watching the magic are the greatest gift, greatest award.

(Editor’s note: Give back when you can… those smiling faces are all worth it. Remember, Everyone wants to be Entertained).

(Update: Jacques is running the Africa region of “Magicians without Borders”)

Jacques has a page on “hire a magician“, where you can contact him directly for booking.